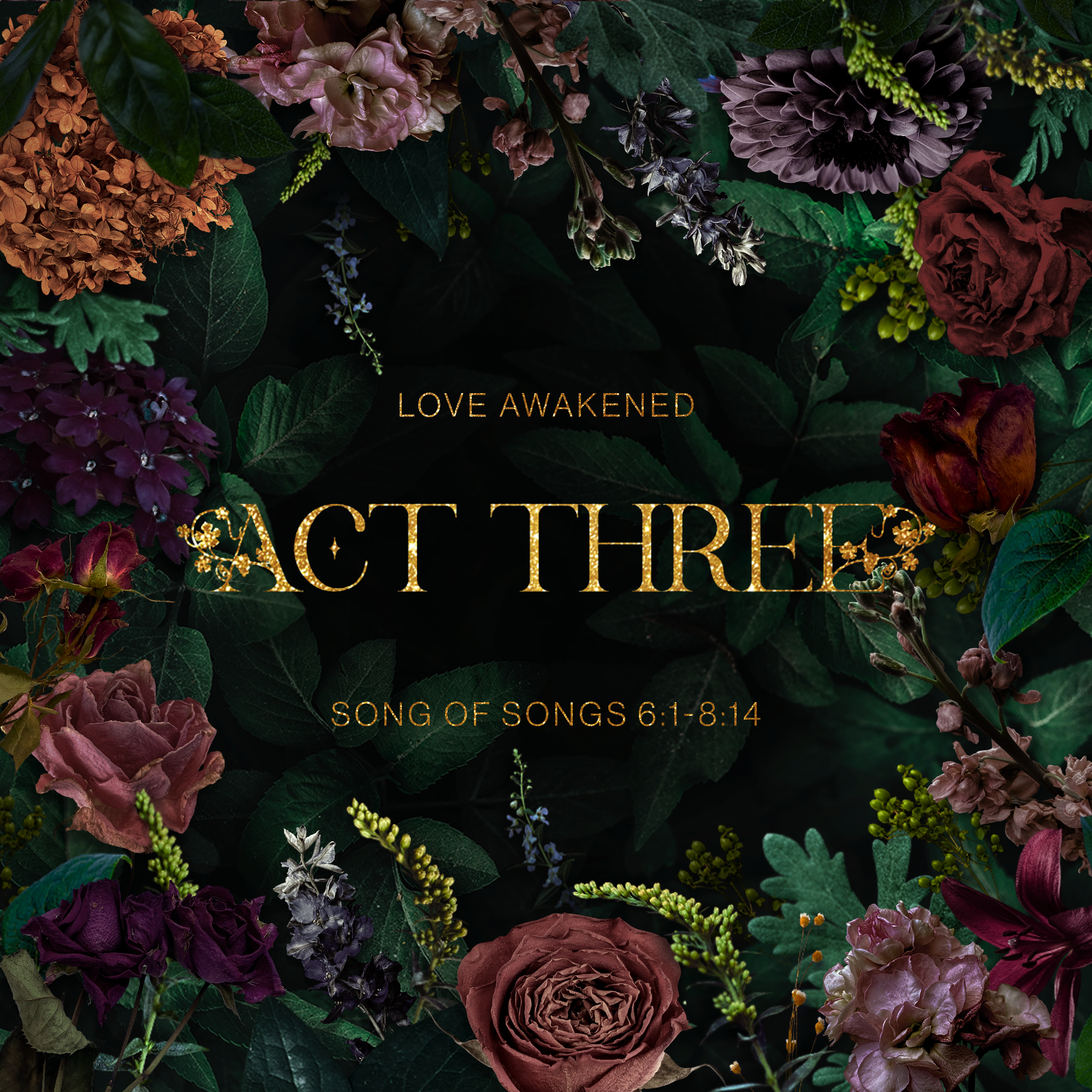 Listen to the audio

This is John’s interpretation of the speaking voices in this passage.

Click here for the full Song of Songs Reading (ESV)

2 My beloved has gone down to his garden
to the beds of spices,
to graze in the gardens
and to gather lilies.
3 I am my beloved’s and my beloved is mine;
he grazes among the lilies.

4 You are beautiful as Tirzah, my love,
lovely as Jerusalem,
awesome as an army with banners.
5 Turn away your eyes from me,
for they overwhelm me—
Your hair is like a flock of goats
leaping down the slopes of Gilead.
6 Your teeth are like a flock of ewes
that have come up from the washing;
all of them bear twins;
not one among them has lost its young.
7 Your cheeks are like halves of a pomegranate
behind your veil.
8 There are sixty queens and eighty concubines,
and virgins without number.
9 My dove, my perfect one, is the only one,
the only one of her mother,
pure to her who bore her.
The young women saw her and called her blessed;
the queens and concubines also, and they praised her.

10 “Who is this who looks down like the dawn,
beautiful as the moon, bright as the sun,
awesome as an army with banners?”

11 I went down to the nut orchard
to look at the blossoms of the valley,
to see whether the vines had budded,
whether the pomegranates were in bloom.
12 Before I was aware, my desire set me
among the chariots of my kinsman, a prince.

Why should you look upon the Shulammite,
as upon a dance before two armies?

1 How beautiful are your feet in sandals,
O noble daughter!
Your rounded thighs are like jewels,
the work of a master hand.
2 Your navel is a rounded bowl
that never lacks mixed wine.
Your belly is a heap of wheat,
encircled with lilies.
3 Your two breasts are like two fawns,
twins of a gazelle.
4 Your neck is like an ivory tower.
Your eyes are pools in Heshbon,
by the gate of Bath-rabbim.
Your nose is like a tower of Lebanon,
which looks toward Damascus.
5 Your head crowns you like Carmel,
and your flowing locks are like purple;
a king is held captive in the tresses.

6 How beautiful and pleasant you are,
O loved one, with all your delights!
7 Your stature is like a palm tree,
and your breasts are like its clusters.
8 I say I will climb the palm tree
and lay hold of its fruit.
Oh may your breasts be like clusters of the vine,
and the scent of your breath like apples,
9 and your mouth like the best wine.
It goes down smoothly for my beloved,
gliding over lips and teeth.

11 Come, my beloved,
let us go out into the fields
and lodge in the villages;
12 let us go out early to the vineyards
and see whether the vines have budded,
whether the grape blossoms have opened
and the pomegranates are in bloom.
There I will give you my love.
13 The mandrakes give forth fragrance,
and beside our doors are all choice fruits,
new as well as old,
which I have laid up for you, O my beloved.

1 Oh that you were like a brother to me
who nursed at my mother’s breasts!
If I found you outside, I would kiss you,
and none would despise me.
2 I would lead you and bring you
into the house of my mother—
she who used to teach me.
I would give you spiced wine to drink,
the juice of my pomegranate.
3 His left hand is under my head,
and his right hand embraces me!
4 I adjure you, O daughters of Jerusalem,
that you not stir up or awaken love
until it pleases.

5 Who is that coming up from the wilderness,
leaning on her beloved?

Under the apple tree I awakened you.
There your mother was in labor with you;
there she who bore you was in labor.

6 Set me as a seal upon your heart,
as a seal upon your arm,
for love is strong as death,
jealousy is fierce as the grave.
Its flashes are flashes of fire,
the very flame of the Lord.
7 Many waters cannot quench love,
neither can floods drown it.
If a man offered for love
all the wealth of his house,
he would be utterly despised.

8 We have a little sister,
and she has no breasts.
What shall we do for our sister
on the day when she is spoken for?

9 If she is a wall,
we will build on her a battlement of silver,
but if she is a door,
we will enclose her with boards of cedar.

10 I was a wall,
and my breasts were like towers;
then I was in his eyes
as one who finds peace.

11 Solomon had a vineyard at Baal-hamon;
he let out the vineyard to keepers;
each one was to bring for its fruit a thousand pieces of silver.
12 My vineyard, my very own, is before me;
you, O Solomon, may have the thousand,
and the keepers of the fruit two hundred.

13 O you who dwell in the gardens,
with companions listening for your voice;
let me hear it.

14 Make haste, my beloved,
and be like a gazelle
or a young stag
on the mountains of spices.